Review of the 5th Thessaloniki Biennale of Contemporary Art in The Financial Times: 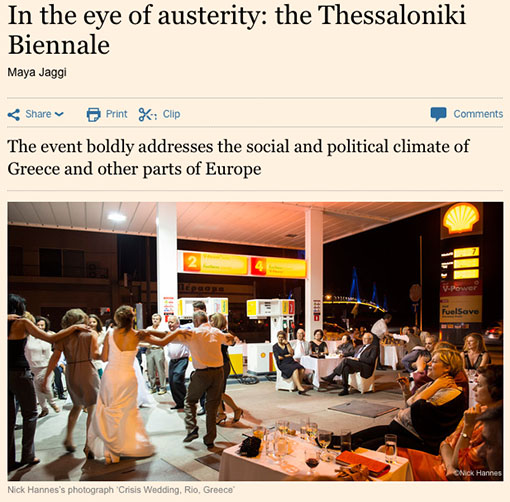 The gleaming revolving door at the entrance to the Pavilion of the Nations in Thessaloniki’s national exhibition centre is deceptive. As you push and rotate, a glass screen swivels to block your exit. Persistence proves futile; the only way out leaves you where you came in. The “fixed” door could lend itself to silent comedy. But the stress, disorientation and sense of entrapment necessitate a health warning to claustrophobics and those with heart problems. Above the door winks a neon line from Samuel Beckett’s Endgame: “The end is in the beginning and yet you go on.”
The “crisis” installation “Revolving Doors (or The Peristrophon)”, by the Athenian artist Nikos Navridis, was commissioned for the fifth Thessaloniki Biennale of Contemporary Art, which opened on June 23, just days before cash withdrawals were curbed and the Greek debt crisis moved into a higher gear. Ironically, the €1m biennale, which runs until the end of September, is co-financed by Greece and the European Union. The last of three such events under a programme agreed years ago with the European Regional Development Fund (though Greek input has shrunk from 20 per cent in 2011 to less than 5 per cent), the 100-day biennale in Greece’s second city could turn out to be a swansong for co-operation.

For now, it funnels funds to museums reeling — like all of Greece — from cuts. At the opening ceremony in front of Navridis’s installation, Thessaloniki’s mayor, Yiannis Boutaris, praised the “self-denial” of staff at the State Museum of Contemporary Art, which has had its budget cut by three-quarters since 2010. Under its director, Maria Tsantsanoglu, the museum has run the biennale since its inauguration in 2007 as the country’s first for contemporary art. Katerina Koskina, the biennale’s director, says visitor numbers doubled to 60,000 by 2013. More than 100 artists are present this year. Volunteers are drawn not only from Greece’s biggest student population, but from the 65 per cent of the city’s young adults who are unemployed.

The first biennales stressed the city’s layered history, and its Balkan and eastern-Mediterranean location, juxtaposing contemporary art with Byzantine and Ottoman monuments. This year’s is the last of three devoted to the Mediterranean region, under the title “Old Intersections — Make it New”. The aim to reposition the northern Greek port chimes with the vision of Boutaris, a winemaker elected mayor as an independent in 2011, who declared that his would not be a “city of ghosts”, an allusion to Mark Mazower’s history of the ethnic cleansing of old Salonica. While Greek nationalists stress links to Alexander the Great (and his sister Thessaloniki), Boutaris is restoring Turkish and Jewish history to a city once known as the Jerusalem of the North, and where the museum that commemorates the birthplace of Atatürk was renovated and reopened in 2013.

The main exhibition, curated by Katerina Gregos, treats Greece’s neighbours as a Mediterranean crisis zone, from a southern Europe in economic meltdown, to Istanbul’s Gezi Park, Gaza and Libya. Among Nick Hannes’s colour photographs from the series “Mediterranean: The Continuity of Man” (2010-14) are an austerity-era Greek wedding in a petrol station, and a Cairo skyline with livestock tethered on the roofs. Tom Molloy’s “Untitled” (2014), a set of 1,000 colour photographs, forces the viewer to approach and engage with his tiny cutouts of refugees and people at war, standing toylike on a wooden table. Ganzeer’s “4 Years of Dreaming Dangerously, 2011-2014” is a collage of posters from the doomed Arab spring.

The location is the vast Helexpo exhibition centre in an area of central Thessaloniki now hemmed in by corrugated-iron walls, and redolent of abandonment. Danae Giamalaki’s design closes off the space but for one back window, creating a sense of confinement that echoes from the revolving-door impasse to a cell whose clock stops when you enter. Yet many expressions of the psychological effects of interminable crisis contain humour, from Nedko Solakov’s “Illusions” (2014), 19 small drawings of nightmares and phobias, to Iván Argote’s photographic series “Alone” (2010-15) of dogs waiting for their masters with pathos, trepidation and an absurd obedience.

Among several bravado satires on money and the financial world is James Beckett’s installation “Voodoo Justice for People of Finance” (2013). The cartoons form a putative rogues’ gallery alongside rocks inscribed with the subject’s place of birth — from Bernard Madoff (Queens, New York) and Nick Leeson (Watford, UK) to Dominique Strauss-Kahn and Christine Lagarde (both Paris). “This is not just fucking business” (2014), an installation by the Spanish artist Carlos Aires, creates a wallpaper of figures from banknotes, alongside graphic lyrics from popular songs such as “Sweet Dreams (Are Made of This)”. “You never own money; it’s illegal to destroy it — it’s surreal,” the artist says, adding: “It’s almost therapeutic to destroy it.”

Opening the biennale, the mayor affirmed “our efforts to bring citizens to contemporary art”. Yet judging by an audacious exhibition in collaboration with Thessaloniki Pride, he is not averse to taking art to citizens. Hosted by the new City Hall, Identalterity is on near the White Tower, where anti-troika protests took place during the previous biennale in 2013. The street violence pictured is not of anti-austerity Greece, but Igor Grubić’s “East Side Story” (2006-08), videos of far-right attacks on gay pride parades in Belgrade and Zagreb in 2001-02. Beyond the show’s art-speak title is an unflinching look at shocking or abused bodies, ambiguous genders and the right to be different, on public display in the main reception hall of a civic building. Images include David Hockney’s 1966 etchings illustrating homoerotic poems by the ethnic Greek poet Cavafy, and Natasha Papadopoulou’s “Caroatids” (2012), digital collages of female nudes with twisted carrot legs.

The show takes place amid sharply contested moves in Greece to extend the right of civil partnership to same-sex couples. Its co-curator, Syrago Tsiara, also links recession and the entry of the neo-Nazi Golden Dawn into parliament to a rise in homophobic attacks. “People are more afraid of losing their certainties as well as property and jobs,” she says. “It makes them more hostile to anything different or strange. Fascists and conservatives invest in this fear. But there are other parts of the country that have become more open. It’s a complicated period, with liberalism and conservatism in tension”, in which contemporary art — a poor relation to antiquity in Greece — can form what the biennale’s director Koskina calls a “laboratory” for new solutions.

An exhibition in the port uses antiquity to explore a present predicament to inspired effect. In a warehouse overlooking the Thermaic Gulf, as though from the loom of a modern-day Penelope, a praxinoscope film projector cranks out a strip of fabric in place of celluloid. The 800 black and white “frames”, machine-embroidered on 72 metres of cloth, derive from photographs and stills of sailors and seafarers’ women taken over nine years by the artist Evangelia Kranioti. Her project “Exotica, Erotica, Etc” (2006-15), involving photography and filming in ports in the Mediterranean, and on a dozen voyages on tankers and container ships, was inspired by the wandering Ulysses. But the 2014 installation “Antidote”, with its 45-second embroidered animation, homes in on the uncertain predicament of his wife trapped on her island, weaving in an interminable limbo while forces beyond her control determine her fate. In the artist’s mind was a question for our times: “How would a woman deal with endless waiting?” Her answer has both technical ingenuity and an epic poetry.