The photography blog ‘Verve Photo‘ published one of the pictures from my Mediterranean project The Continuity of Man. 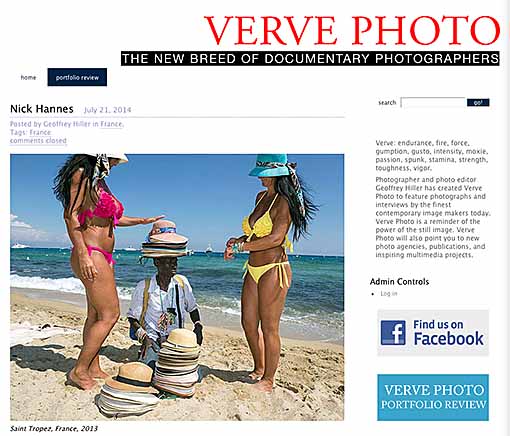 From the blog:
“A Senegalese migrant is selling sun hats to two Italian twin sisters on the fancy beach of Pampelonne in Saint-Tropez, southern-France. Travelling the Mediterranean coasts I encountered these African street hawkers all over. They go where the tourists go. When it rains, they sell umbrellas and plastic ponchos, when it’s hot, they carry sunglasses and hats along. Its a matter of survival to them. This photograph is part of my series The Continuity of Man, a visual portrait of the Mediterranean region. From early 2010 untill now I have been travelling the Mediteranean coast in twenty countries in Europe, the Middle East and North-Africa. I focused on various contemporary issues such as migration, mass tourism, urbanization and its impact on the natural landscape. I found out that these topics are often linked to each other, as this picture proves.”