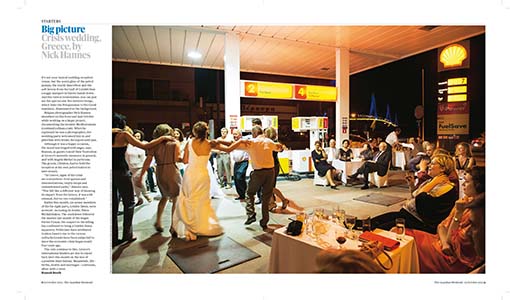 Text:
It’s not your typical wedding reception venue, but the warm glow of the petrol pumps, the sturdy dancefloor and the soft breeze from the Gulf of Corinth beat a soggy marquee in Surrey hands down.
And the view is tremendous: you can just see the spectacular Rio-Antirrio bridge, which links the Peloponnese to the Greek mainland, illuminated in the background.
Belgian photographer Nick Hannes stumbled on this forecourt last October while working on a larger project, documenting the modern Mediterranean (continuityofman.com). When he explained he was a photographer, the wedding party welcomed him in and plied him with drinks. He stayed until 3am. Although it was a happy occasion, the mood was tinged with anger, says Hannes, as guests voiced their frustration at Greece’s austerity measures in general, and with Angela Merkel in particular. The groom, Christos, had to hold the reception at his own petrol station to save money.
“In Greece, signs of the crisis are everywhere: food queues and demonstrations, empty shops and unmaintained parks,” Hannes says. “This felt like a different way of showing its impact. Even for Greece, it was a bit unusual, but no one complained.”
Earlier this month, six senior members of the far-right party, Golden Dawn, were arrested, including its leader, Nikos Michaloliakos. The crackdown followed the murder last month of the singer Pavlos Fyssas; the suspect in the killing has confessed to being a Golden Dawn supporter. Politicians have attributed Golden Dawn’s rise to the vicious cutbacks Greeks have been subjected to since the economic crisis began nearly four years ago. The cuts continue to bite. Greece’s international lenders are due to report back later this month on the size of a possible third bailout. Meanwhile, life – births, deaths and marriages – continues, albeit with a twist.
Hannah Booth