I arrived in Tanger, Morocco, this afternoon, to continue working on my Mediterranean project. From here I will follow the coast eastwards, via the Spanish territories Ceuta and Melilla, to finish in the city of Oujda near the Algerian border in two weeks.
From the airplane window I had a wonderfull view on the Strait of Gibraltar and the ‘Pillars of Hercules’. Old Tanger is overwhelming at first sight. Lively, shabby, inspiring. I think I’ll need a day to get acclimatized to the north African way of life. 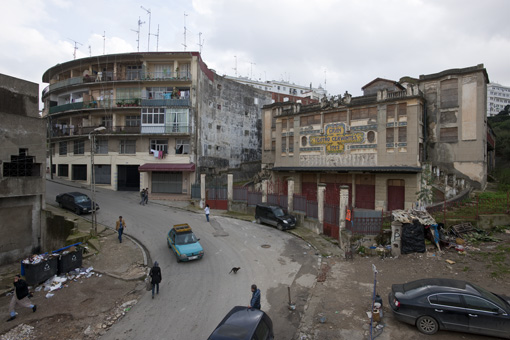 The Gran Teatro de Cervantes is a remnant of the days when Spaniards formed the largest non-Moroccan community in Tanger. It opened its doors in 1913 and was very popular between the two world wars. Today nobody seems to care about it. It’s sad to see such an architectural pearl die. I climbed up a roof to make this photograph.