Exhibition makers “Work In Progress” invited our collective Nadaar for their second show at De Zaal in Ghent. Hurry up and have a look. It lasts only ten days…

“Many photographers share their works-in-progress on the internet. But sometimes photos deserve more attention, a better print, or a less volatile setting. “Work In Progress” wants to give photographers the chance to show their works-in-progress in real life, through short-run and low-profile exhibitions, in a guerilla-style approach, with prints ‘pinned’ to the wall.”
(from the Work In Progress introduction text)

For this occasion, Eric De Mildt shows a reportage about refugees in Belgium. Tim Dirven exhibits previously unpublished Congo pictures. Jan Locus chose his photographs of Zoos around the world. Dieter Telemans shows black and white photos of handicapped children in Burundi. And I decided to exhibit my ongoing series on poverty and housing problems in Brussels.
Thanks to the Royal Academy for Fine Arts (KASK) in Ghent to provide the more than 70 prints for the exhibition. 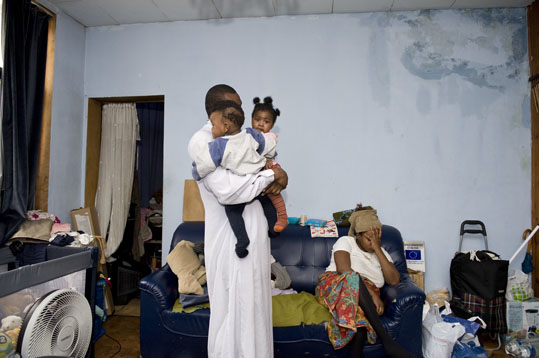 Adedayo Folowosele and Florence Benga from Nigeria live with their three children David, Deborah in an old humid house in Molenbeek. They wait regularisation and can't afford a decent house. (Nick Hannes)