One of the photographs of ‘Red Journey’ has made it into the New Scientist 2010 calendar. The picture shows a herd of camels sheltering under a stranded ship on the former seabed of the Aral Sea in Kazakhstan. I took this picture in 2007 in the former fishing town of Dzhambul, near Aralsk. I couldn’t believe my eyes the moment I arrived at the scene. I slowly came closer, trying not the scare the animals. I took about ten pictures before they started to get up and move. It was one of those rare lucky days during a long trip through Central Asia. All I had to do was to point the camera and push the button. Reality is often more absurd than my fantasy could imagine. Ships of the Desert 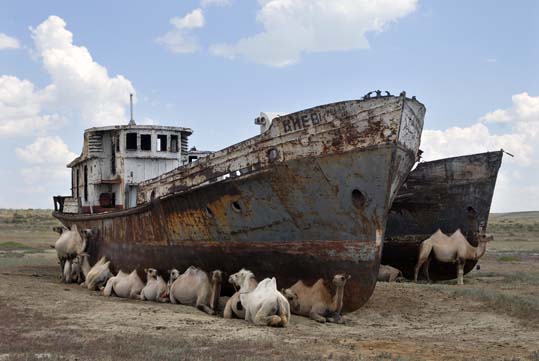